At Correlation One, we’re on a mission to make Data Science for All by providing programs that help Women, Black, Latinx, and LGBT+ professionals overcome the structural barriers that have traditionally limited them from joining the data economy.  Promoting  diversity in the data economy will require companies, institutions, and hiring managers to re-think how they assess, train, and hire data talent.  We’re inspired by the diversity conversation that is taking shape globally across traditional and social platforms.  The team at C1 Insights is working to re-share and provide commentary on how the general discourse on diversity in America applies to the data economy.

The return to prominence of the Black Lives Matter movement in 2020 has inspired corporations to reaffirm their commitment to diversity and inclusion, but after years of public pledges and affirmations, many are questioning whether these words translate to meaningful impact for Black professionals and Black communities.  Hannah-Jones, an expert in the history and present day impact of structural racism in America shared her thoughts on the central question: “What more is needed from the business community to produce lasting change?”

We’ve highlighted some of Hannah-Jones answers below that we think are particularly important for any professional to consider as they ask themselves the question: “What can I do to make my workplace more diverse?”

This talk covered many of the key structural challenges that are limiting the numbers of Black men and women landing jobs in the data economy. Correlation One is launching Data Science for All: Empowerment this October to start fixing the problem.  If you’re interested, we’ve included some info on the program and how you get involved below.

If you were running a fortune 500 company today what are the things that you think can be done, and not just on a moral basis, but on an economic one as well?

Corporations should be looking at who they're hiring, who they're promoting and if they are using their power to help black businesses to get a foothold in the economy. All of those things are very important, but what's much more important to me is to think about  the power that these corporations could bring to bear in communities if they were fighting for a communal good and also the economics of doing what is right is actually a good recruitment strategy

I do think [diversity] goals and targets are very important because what we've seen is every company, including [The New York Times], says that they want more diversity, but how then are those companies holding themselves accountable for that, and how are we as the public able to hold companies accountable if there are no targets or goals?

On the hiring process:

Black people still face discrimination through every step of the hiring process. We don't have a fair system of hiring in this country and setting these goals says ‘okay we understand that White Americans often get an unfair advantage and we are going to try to work really hard to eliminate that advantage but it's not about taking someone's job.’

What do you think when people say (and you often hear this especially at senior levels) : "we don't have enough 'diversity pipeline' and you know the reason why we haven't put more diverse candidates on our board is because we either can't find we can't find them, or we don't think they have enough experience?"

How are we going to get people in some of these roles that historically have been subject to systemic racism and haven't had the opportunities to get necessarily the “experience” on paper that maybe others do?

So I think it's a complicated question. There certainly are pipeline problems, but mostly that is an excuse. Certainly [the lack of diverse talent in hiring pipelines is] because of structural racism and structural inequality. There are probably fewer black people who have all of these stated credentials that these organizations are looking for, but there's not so few that you could not have a more diverse workforce.

The typical black child attends a high poverty under-resourced school and this sets them on a course to not be able to go to an Ivy League school that all companies love to recruit from. [Companies] understand that they are stacking structural disadvantages, but then when it comes time to hire or replace people on the board then they say, ‘Well you know we need the person who is black but also has the exact same resume and criteria as the white person.’

You can't acknowledge structural inequality and then set ‘standards’.  They're not really standards because the kids I know who went to what we would label a failing school work their their butts off, end up going to an historically black college and they're not going to have the same internships, they're not going to have the same letters of reference, but that kid has worked really hard and that kid [has the potential to impact the trajectory of your organization].

[Hirers need to acknowledge] that people have different experiences and it's not about intellect, it's not about ambition, it's not about work ethic- and if we change our idea of what those standards should be to actually consider how unequal and unfair our society is that's actually the way that you build a [diverse workforce].

On the state of diversity and inclusion in 2020:

I often say that what corporations do in these moments is they look for ‘phenotype diversity’ but not actually a diversity of experience and diversity of thought. They want to hire people who come from different racial backgrounds but who largely are in line with the way that they already think. When they do hire [diverse candidates] they can't retain them. You can keep hiring people in, but if you're losing just as many people as you hire in then something is clearly wrong with the institution itself and whether or not it is ready for what true diversity should bring. So companies really need to be thinking strongly about what that is. Are they actually willing to change and adapt to a more diverse workforce? Or are they simply expecting that diverse workforce to adapt to the existing structure?

(The above text was adapted using YouTube’s transcription services.  We encourage you to listen to the full talk here.)

For the past 5 years, Correlation One has been at the nexus of data science and human capital, providing companies with tools and tactics to elevate their data teams while providing underserved and underrepresented communities access to applied data science training.  Starting in 2019, we realized that the data economy faces an existential crisis- Women, Black, Latinx, and LGBT+ individuals are being excluded from the AI revolution that is poised to disrupt every aspect of the way we work.

In 2020, companies of all industries are committing to hiring more diverse candidates in an effort to better reflect the demographics of our countries and the world as a whole.  However, data roles, and especially data science roles, are subject to a unique blend of structural barriers that eliminate over 90% of the population from even being considered for employment.

While Hannah-Jones talk was not specific to any industry or role, I could not help but apply her breakdown of the systemic prejudices that prevent Black Americans from achieving equal representation in the professional workforce to what we have seen in the data science and analytics space.

Data science and Artificial Intelligence are the major drivers of the economy of the future, but at the moment this future is not being built by a workforce reflective of our society as a whole. PricewaterhouseCoopers estimates that data science and AI could contribute $16 Trillion to global GDP by 2030 -- a staggering sum that is set to not only reshape the global economy, but also impact nearly every important industry and role that it encompasses.

Today, Latinx and Black professionals hold less than 10% of data jobs though they make up more than 30% of the overall US population (Harnham- 2019 USA Diversity in Data and Analytics report).  Data fluency rates, which have a much more widespread relevance to the economy, are also tilted heavily away from Black, Latinx, and LBGTQ+ professionals. This imbalance, if left uncorrected, will have severe detriments into the future. It will deny key roles to Candidates from underrepresented backgrounds and further deepen the unequal representation we see in many fields.

Today, the majority of data science job openings require a degree (and often an advanced degree) in Computer Science, Statistics, Physics, or other related highly quantitative fields.  As always, candidates with degrees awarded by elite institutions like Harvard, Stanford, and MIT get priority, and in case of the highest paying financial services data science jobs (eg: quantitative traders and quantitative researchers), candidates with peerless academic records from institutions deemed ‘Tier 2" or lower fail to pass the resume review portion of the talent selection process.

This means that individuals who were not advantaged to pursue advanced careers in academia, and even individuals who have achieved Masters and PhD degrees from schools like HBCUs for example, are not even being considered for roles.  To use Hannah-Jones analogy, the data science ‘genotype’ of advanced STEM backgrounds, produces a ‘phenotype’ that is overwhelmingly Male, White and/or East or Southern Asian.

Lack of diversity poses an acute and specific threat to the efficacy and ethics of the future of the global data economy.  The actual work product of data professionals informs, and increasingly automates, decisions that impact our lives as consumers and citizens.  When data teams are not reflective of our society as a whole, their work is subject to implicit and explicit biases that are likely to be reproduced at scale.  This means that companies could alienate significant portions of their user populations.  For public sector institutions, the proliferation of biased data science could have massive negative effects for the prioritization and distribution of key resources.  The best way to avoid these potential adverse impacts is to build teams with professionals with different backgrounds, ethnicities, and experiences at all seniority levels.

In effect, it is no surprise that companies fail to build talent pipelines for their data organizations that are reflective of our society as a whole.  At Correlation One, we’re working to increase the net supply of qualified Black, Latinx, and LGBT+ data scientists by providing world class data training for free to qualified applicants.  Our upcoming DS4A Empowerment program will include 13 weekends of applied data training to help students and working professionals gain the skills they need to achieve their place in the data economy.  These learners will work on real-world data problems provided by program sponsors and non-profit ‘Impact Partners’ that will promote data fluency, preparing program graduates for roles in data science and analytics as well as providing the key tools and tactics to bring data-driven practices to a broader range of roles like Sales, Marketing, and Product Management (to name a few).

We’re committed to training 10,000 new data professionals from underrepresented groups by 2022 via our DS4A Empowerment and DS4A Women’s Summit programs.  If your company is serious about promoting Diversity and Inclusion in data roles, please get in touch: 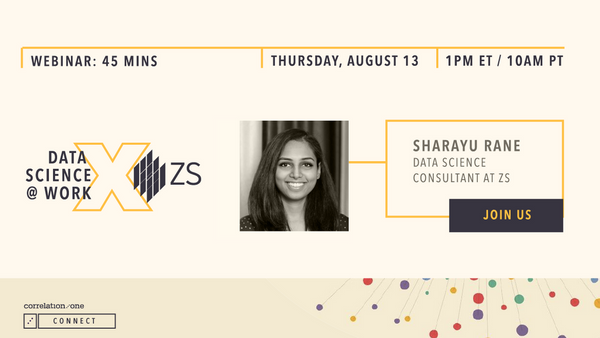 Hear from Sharayu Rane, Data Science Consultant for ZS Associates, in this edition of Data Science at Work from C1 Connect. 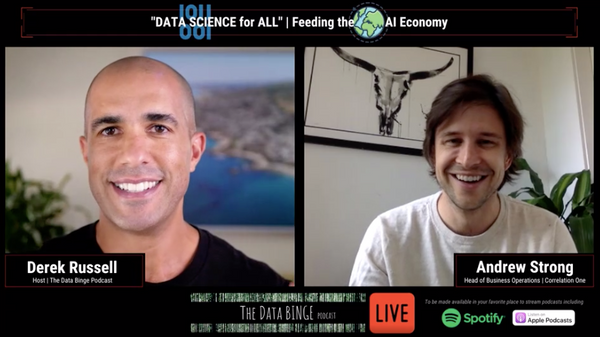 Correlation One’s Andrew Strong joined Microsoft’s Derek Russell on the Data Binge Podcast. The discussion covered a range of topics, including education reform, opportunity, and the importance of diversity in data science and AI.

C1 Insights
—
How can Companies actually make an impact on Diversity? // DealBook Debrief: Racial Injustice and Corporate America
Share this